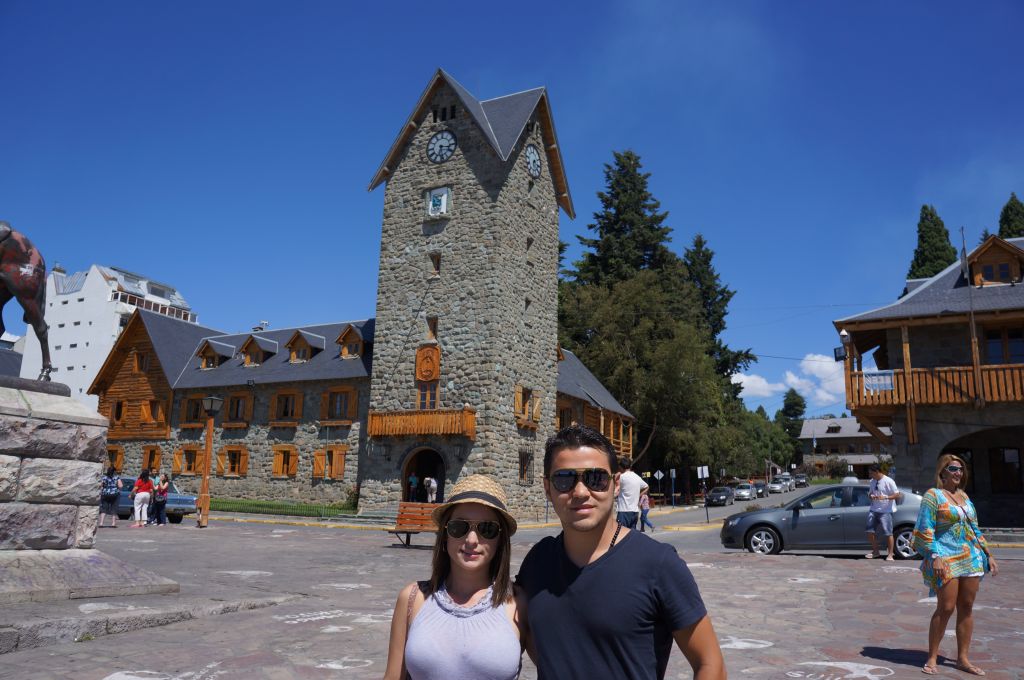 Since the day I can remember when I was a little kid, my parents always had some photos around the house, one of them which I enjoyed looking at was this picture of me as a 2-year-old baby standing next to some awesome and huge St. Bernard Dogs. As I grew older and asked where this picture took place my parents explained how when we used to live in Chile (which was only 2 years when I was a baby and unfortunately I can’t remember any of it) we as a family took a trip to Bariloche in the south of Argentina, and I can vividly recall both of my parents expressing how beautiful it was. The same pictures always remained on the walls somewhere along the places we lived and I never paid much attention to them anymore, that is until last year in early in 2013 when Vicky and I decided to take our first long trip to South America.

There were so many places we wanted to go see, it’s funny as a traveler how you feel like a kid in a candy store when you are in a new continent or country, because you want to try to see every city, every monument, every awesome place and I guess there is just not enough time or money or both to see them all. Of all the places there are to see in South America I definitely knew that I had to make it to Bariloche, Argentina.

If you have been or decide to go to San Carlos de Bariloche there are a couple of ways to get there; you could fly to Bariloche from either Santiago de Chile or Buenos Aires which is not very cheap (U$500+) or you could drive to Bariloche which is what I totally recommend from either Santiago or Buenos Aires if you have the time. We planned our trip to drive down to the southern hemisphere of the continent from Santiago, fortunately enough I had a cousin and aunt who wanted to join us so we rented a van in Santiago and headed down south. To tell you the truth I’m not sure what is most wonderful and beautiful, if it’s the Town of Bariloche and its surroundings or if it’s the actual drive to get there passing through small towns and an astonishing scenery to get there from Santiago. We took off to take the long drive to Puerto Varas a small village town in the south of chile close to the beautiful Osorno Volcano, then from there we drove to Bariloche passing the Argentinian frontier by car.

As we drove past the border and presented our passports the beautiful scenery just kept going and going, then after a couple of hours the road takes you alongside of the Nahuel Huapi lake, at one point you can see Bariloche across the lake which seems to be really close but you are still a couple of hours away to make your way all around the lake making it to San Jose de Bariloche. We got there late in the afternoon in search of the apartment that we had rented. (We are AirBNB lovers, you can use this link to get $25 Free) Once we found the place we were stoked to see that the nice and affordable unit that we had rented was very close to the town center and had a wonderful unobstructed view of the lake.

We took our good night of sleep and woke up very early to go see and do everything that Bariloche had to offer. As we walked in to the city center I felt like I had walked into the same picture that my parents had hanging on the wall all this years. It seemed like the place had been frozen, (except for the graffiti on the walls), once Vicky saw the St. Bernards I knew we immediately had to replicate the photo of Bariloche I had in my mind. Not sure if it was because we visited Bariloche over the Summer but there weren’t that many people offering to take the famous picture with the dogs, but we eventually found a guy that offered us to take the picture, he seemed to be nice enough and most importantly to us he seemed to take good care of the St. Bernards. We paid him the U$10 for the photographs with a printed copy and took a bunch more with our camera.

Things to do in Bariloche

You will be surprised of the many things that you can do in Bariloche since it’s rather a smaller but very touristy town. After walking around town and enjoying the beautiful cobblestone streets we decided to go out in a horse ride that will take us up to one of the mountains around Bariloche. I can’t recall exactly how much we paid, but I remember it being very inexpensive around U$10 each. We made our way to the horse ranch where a traditional Argentinian Cowboy showed us which horses we were going to take, we each picked one and off we went. The guided tour was awesome, going uphill the mountain and seeing and being in the middle of nature is one of those feelings that you wish could last forever. Once we made it all the way to the top (after waiting for some time because Vicky felt bad for the horse and did not want to rush him plus let him stop in every three along the way to eat) the view was simply spectacular.

Later that night we decided to check out the Bariloche Casino which was just steps from the apartment we rented, and it was quite nice, I got my cousin into playing the roulette which I really enjoy playing, not sure why, and while I lost the little money I put in, he was jumping around wining some bets. After we told him how it was time to quit before he lost whatever he had won, we then decided to go have some drinks, walking around we found Ice-Bariloche (Which I think is a very clever name) , this is as the name suggests an Ice-Bar, it wasn’t pretty packed but we decided to check it out anyways, we were expecting the whole place to be the Ice-covered bar, but it turns out its only a portion of the bar, which resembles one of those large industrial fridges covered in Ice, by no means is a big party place, but I still believe is worth checking it out. We had a couple of drinks and enjoyed checking the place out.

The next day we went up to Cerro cathedral which is where people go to Ski in Bariloche in the Winter. Going there made me wish it was winter time for a moment so I could ride a snowboard down the mountain, which is definitely what I want to do next time I visit Bariloche. They had some nice bars, one which had my last name in it 😉 after some beers someone at the mountain suggested we checked out Cerro Otto instead. Cerro Otto is the other big mountain in Bariloche which has a cable car that takes you all the way to the top. Up there you have the best view of all Bariloche plus an awesome revolving restaurant that offers affordable food and wine with one of the best views in the world. Check out this time-lapse video we made of the view from the restaurant!

Last but not least if you make it to Bariloche make sure you check out the Havana Chocolate Museum in Bariloche, they offer a quick tour of the factory and you can enjoy some of the best Argentinian alfajores.

Watch our Video Highlight from Bariloche

Why you need to start living t...