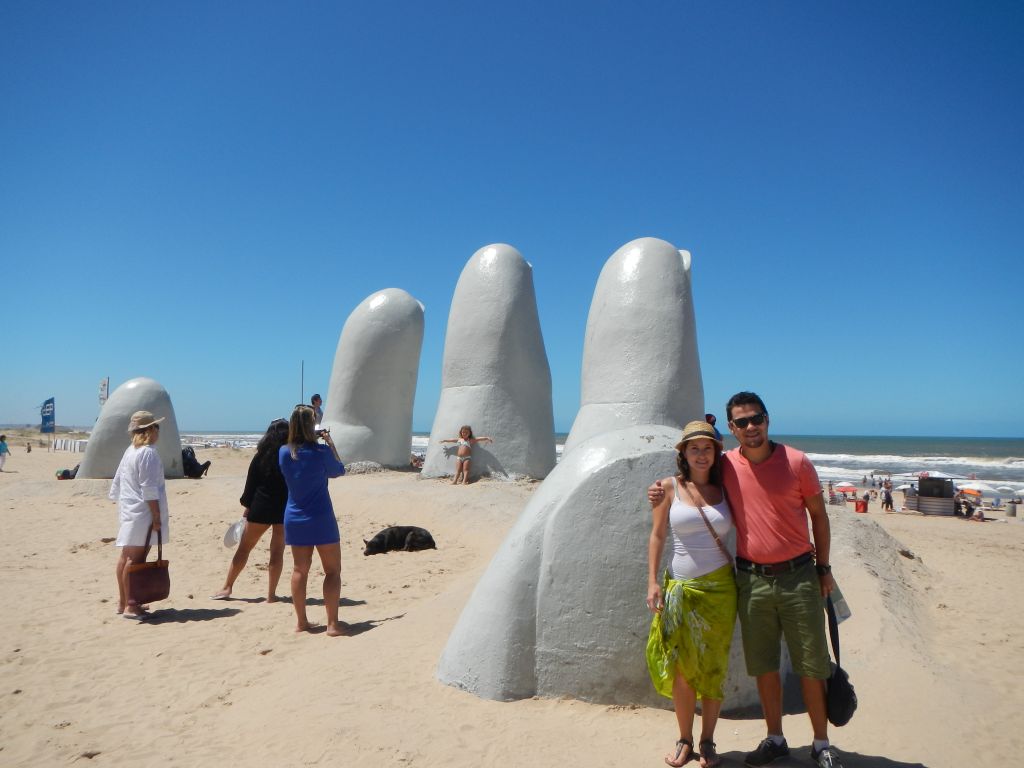 I have heard many stories about Punta del Este in Uruguay and how it was the “Miami” of South America, every now and then you will hear about Latin personalities such as Shakira and Enrique Iglesias spending their holidays in Punta del Este, but was it really even remotely similar to Miami or any other beach city or town in the US? Let’s find out.

Used to the beach towns in Colombia where I grew up, I’m used to beautiful beaches, but the towns themselves do not offer much, Cartagena is probably the exception, but what Cartagena has in historical character lacks in white sand beauty. So when we decided to visit Punta Del Este in Uruguay in 2013 I did not want to get my hopes up too much, I wanted to see for myself why everyone had such great reviews about this small little city in the south of Uruguay.

If you want to visit Punta del Este most likely you will be visiting from either Buenos Aires or Montevideo, what we did and this is what I recommend if you are staying a couple of days in Buenos Aires and want to check out Uruguay is to get the Ferry from Buenos Aires to  Montevideo then spend a day in Montevideo and go to Punta del Este by bus. After searching for the Ferry companies that take you to Uruguay from Buenos Aires, the only one you see everywhere is BuqueBus, after searching for hours online I found there is a smaller company called ColonialExpress which offers the same Ferry ride at a much lower rate. We woke up early in the morning in Buenos Aires and got to the ferry station about 7am, the ferry ride to Montevideo is about 3 hours and its quite comfortable. We decided to spend a day in Montevideo which is the capital city of Uruguay and its quite nice and easy to see since it’s not very large. We rented a room for the night and the next morning we took the first bus out to Punta del Este. The bus ride to Punta del Este from Montevideo is less than 2 hours and they have buses leaving all day from the bus terminal. After the two hour comfy ride to Punta we got to the bus terminal in Punta del Este and walked to the hotel we had reserved which was a couple of blocks away from the terminal.

Our first reaction of the city was that in terms of large high rises and size of the city, Punta del Este is definitely nothing like Miami, but it did had that luxury feel that you get in some parts of South Beach, so at least whoever said that was not too off point. We checked in the nice little hotel, you’ll be surprise the deals you can find in punta for accommodations then we decided to go see the first thing we saw once we got out of the bus which were a couple of weird looking fingers sticking out of the sand.

The fingers are part of what it is called Mano de Punta Del Este (Hand of Punta del Este) a pretty cool sculpture right in the middle of the beach in Punta del este. As you can see there are always people around taking pictures so it was hard getting a shot of just us without anyone else, but you definitely have to check out the Hand of Punta del Este if you are in town. We then decided to eat something in “Parador los Dedos” which is the small restaurant right next to the Hand sculpture, nice quiet restaurant with a nice sea view, but not the best food in Punta whatsoever.

After we checked out the Hand sculpture we decided to then rent a cart to go around punta seeing everything else there is to do. You can rent a regular car or a golf cart for about U$30 we decided for the Golf Cart since we were in the beach anyways so we could feel the breeze and decided to head straight to the famous Casa Pueblo Hotel, this amazing hotel was design by artist Carlos Páez Vilaró who took 36 years to construct the place. If you are in Punta del Este you definitely have to check out this place, it is magical. What I recommend if you do not stay in the hotel, which is rather expensive is to go down to the restaurant bar. When you get to CasaPueblo most tourist check out the museum which I’m sure is nice, but instead we decided to just go down to the restaurant by the pool and get a drink which are reasonably priced, and you get to enjoy the amenities and the view for a little while just like if you were a guest. Here are some amazing pictures of what Casa Pueblo in Punta del Este looks like.

We rode our golf cart back to town enjoying the scenery then changed clothes real quick for our nigh out in town. Punta del Este is a great place to relax and vacation, it has that perfect mix of beautiful beaches to relax as well as plenty of activities to do at night such as restaurants and bars/clubs. We decided to check out the casino at the Conrad hotel after some bad luck but good times we then drove to the very south point of Punta del Este where they have a street full of restaurants and clubs.

The next day we decided to head east along the coast towards el Tesoro where we heard is where most of the mansions are located. Again in our little golf cart which did not go very fast we started leaving punta when out of the sudden we start seeing Mansion after Mansion, they have some of the most beautiful houses in Punta del Este, with some amazing architecture. We crossed this twisted bridge called “Puente de La Barra” which was pretty odd looking on the way to El Tesoro. After we found out that our golf cart was not going to take us very far, we decided to just sit back by the beach en relax for a little while before coming back to return the rental and getting in the bus back to Montevideo.

If you are in Buenos Aires or Montevideo and thinking about going to Punta del Este we totally recommend it. Most people take the ferry out to Colonia, which we heard is a nice little town in Uruguay, but if you have a little bit more time definitely make sure you make it down to Punta del Este, you will not regret it.

If you have any questions about any of the trips or locations we visit, do not hesitate to drop us a line at [email protected] we will be more than happy to help you out any way we can.

Why becoming a Minimalist will...

How technology is consuming ou...